We are returning this week to ranking the movies of Steven Spielberg, the greatest director of all time.

For those keeping score at home, the rankings so far have been: 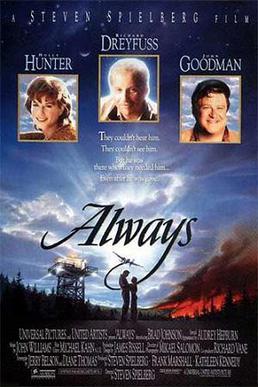 This is one of Spielberg's most sentimental movies, and that is saying a lot.  The story is about Pet Sandich (Richard Dreyfus), a pilot who fights forest fires with his best friend Al (John Goodman) and the his girlfriend Dorinda (Holly Hunter).  But when Pete dies in a fire, he invisibly haunts Dorinda and Al as they grieve.  Pete then slowly watches a romance bloom between Dorinda and new hotshot pilot Ted (Brad Johnson)

There are some script problems with this movie.  Particularly that it gets WAY too talkie at the very end and that the movie clearly should have involved Dorinda with Al.  But besides, that, you can see Spielberg using all of his powers to pull at the heartstrings.

The firefighting scenes are harrowing.  You can feel the constant danger from the hellish landscape, which only accentuates the courage of those who fly into danger.  Throughout the movie, Spielberg makes the lives of these fire-fighting pilots so visually engaging and interesting, that the romance is almost a distraction.

I have never been a big fan of Holly Hunter, but Spielberg films her in the most attractive lighting so that you can easily understand how Pet and Ted fall in love with her.  Goodman does a great turn that is both comedic and dramatic, proving early in his stardom that he could tackle and amazing range.  Dreyfus is also charming and charismatic as Pete and he carries us throughout the film.  There is even an ethereal Audrey Hepburn as Pete's spiritual guide, Hap, who brings a quiet peace and grace.

The afterlife images are so incredibly gorgeous.  The scene where Hap and Pete walk through the Illisum Fields is pastoral and peaceful that you can almost feel the paradise around the corner.

Ultimately, the movie is about love, grief, and letting go.  People often accuse Spielberg of being sappy.  If they do, they could certainly turn to this film, which is unabashedly a tear-jerker.  I cannot help but get emotional watching Pete and Dorinda's ghostly dance late.  It is such a beautiful picture of complete intimacy and tragic distance at the same time.  It is a moment that so visually captures the grieving process.  If you want a good emotional catharsis, I would recommend this film.

14.  Close Encounters of the Third Kind 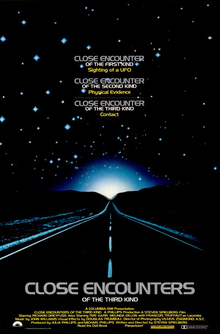 There are many people who would put this film higher on the list.  And there is much to admire about it and much for which Spielberg should be proud.  Not the least of which is that this is one of the few movies that he also wrote.

The biggest flaw with the film is a stylistic one.  In this film, like AI: Artificial Intelligence (which Spielberg also wrote), the movie is focused more on giving the viewer a unique theatrical experience than it is in telling a straightforward story.  As someone who places narrative as primary, this approach tends to be a big turn-off.  Spielberg himself admits that there are things he would not have written in the film now that he is older, particularly how the main character Roy (again Richard Dreyfus), leaves his family to pursue his obsession.

However, Spielberg is mostly able to overcome this deficit by creating such a rich and moving atmosphere to the film.  There is a choking feeling of encroachment as the characters begin to encounter these other-worldly beings.  Spielberg is able to create a strong horror-movie vibe, as seen in the abduction of the child.  But above and beyond that, there is a strong sense of almost existential dread at human powerlessness in the face of such an overwhelming and mysterious alien force.

What is absolutely incredible about this focus on atmosphere is that Spielberg is able to make the shift from horror to wonder without it feeling like a false step.  Roy is surrounded by all of these seemingly sinister forces like the US Military and the aliens themselves.  But in the final scenes, we can see the bare and innocence in everyone, including the aliens.  We can see two people taking the first steps in communicating.  It is powerful in its use of its visuals and music (who can forget that amazing set of tones from the mighty John Williams?).  But it is also a powerful statement of hope and optimism.  It says that in the black void of space there could be friendly faces waiting for us.  And even more wondrous, that we could receive them with a friendly welcome.

Steven Spielberg's Ready Player One has been called "nostalgia porn" for its plethora of inside-joke, '80's geek references spread throughout the film...And yet Ready Player One is a great deal of fun.  The virtual world is gorgeous.  I know many people might be turned off by its artificiality, but I found it to be a new and creative way to film and frame the action in ways not bound by the real world.  Often movies that look like video games can feel passive, like someone else is playing that video game and you are only watching.  But the way the movie is filmed, Spielberg makes you feel as if you are the one leading the action.  The visual dynamic was incredibly exciting.  The nostalgia factor added layers of texture to what is already a thrilling spectacle.  Spielberg still employs is trademark single shots to get across the emotional effect he desires.  The environment of the stacks makes you feel closed in and claustrophobic.  He also does a great job of distinguishing how he films the real world and the Oasis, employing hard lighting and hand-held cameras for the former and using bold colors and smooth camera moves for the latter.  Spielberg shows us the wonders of the Oasis, but wisely shows us how ridiculous people look from the outside with their VR gear on.  He constantly tries to show the balance so that you don't make the false choice of one world over the other.I am also a sucker for a good treasure hunt movie, whether it be Indiana Jones, The Goonies, National Treasure, or the much underrated 1980's Disney film Midnight Madness.  Ready Player One is just a scavenger hunt on a large scale that overlaps with my personal wheelhouse of 80's pop culture.  The narrative moves well as each discovery leads to the next clue which leads to the next challenge and so on.  This continues as our heroes grow closer bonds to each other as the story progresses. In the most stunning scene in the film, our heroes have to enter into a famous movie that Haliday loved.  When I say "enter into the movie" I mean that in a literal sense.  This was one of my favorite visual spectacles in years as the digital avatars enter into the movie's environment faithfully recreated with film grain, lighting, and music.  It was so completely immersive that I found myself having to often look away (you will understand what this means when you see the movie).  I have honestly never seen anything like this scene.Haliday is Spielberg.  Spielberg helped create the popular culture we all live in.  He was a kid who dreamed of becoming the greatest filmmaker in history, which he has.  Movies are expensive and this is understandable.  But in many ways he has become a corporation.  And in that there is a loss of that innocent artistic purity.  The same thing is seen in Haliday, who knows that something has been lost along the way and hopes that the next generation will set right what he did wrong.  Both Haliday and Spielberg want to draw you in to a fantasy world in order to enrich life in the real world.  But how many of us get stuck in fantasy.  The movie asks the question whether or not our interactions with games and art are making life in the real world better or worse.To be sure, Spielberg good have gone much deeper with implication of technology as he did with AI and Minority Report.  Instead he just wanted to tell a fun adventure story, which is no bad thing.So whether you know what the Glave is from the movie Krull or you are only a casual movie-goer, Ready Player One is a fun, visual spectacle that you will enjoy watching.
Posted by Catholic Skywalker at 8:52 AM