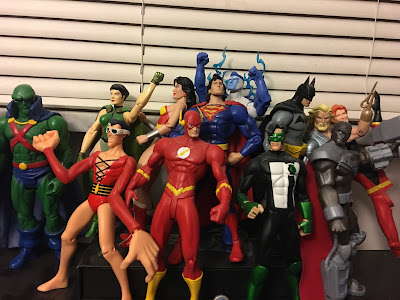 A few months ago, I first heard rumblings about the next planned big event in DC Comics called "5G."  Besides the title being incredibly stupid and confusing, I could not find a lot of details until recently when it became rumored that the project is dead.

When I looked into what 5G was intended to be, it is clear that DC wised up and dodged a bullet.

In DC, there have been a lot of legacy characters who have taken up a title hero's role with varying success.  The best examples of this are the Flash and Green Lantern, who both were smash hits when they replaced their Golden Age characters (Jay Garrick and Alan Scott) with their Silver Age successors (Barry Allen and Hal Jordan).  They even managed to do it years later with the Wally West Flash and Kyle Rayner Green Lantern.

But those are the exceptions, not the rule.  Some heroes are so tied to their original character that you any substantial change will not take.

There have been times when other people have taken on the mantle.  And to be sure, there have been interesting stories found in those replacement arcs, like Reign of the Supermen or Grant Morrison's Batman and Robin.  But even in the best of those times, it always felt like those characters were borrowing the costume until the real hero returned.

That is one of the fundamental flaws with something like 5G.  No matter how expansive the story would be, it would never feel like it was one of lasting consequence.  All of us would simply wait until Clark, Bruce, and Diana would return.  And if they delayed the return too long, fans would become fed up.

As far as I can tell, this idea was the brainchild of Dan DiDio.  I am no industry insider, so take everything in this following paragraph with a grain of salt as I have had to cobble it together from unverified sources.  But nearly everything I've ever hated in the modern DCU has come from Dan DiDio.  He notoriously hated legacy characters like Dick Grayson and has pushed for them to be killed off.  After the buzz from The New 52 wore off, he tried to make the comic line hip and cool with his "DC-You" push where they depowered superman and a mohawked Jim Gordon wore a metal suit that looked like the Tick and became the new Batman.  DiDio was the one who mandated to Tom King that he make Wally West a murderer in Heroes in Crisis.

5G smacks of desperation to get media attention and appear cutting edge and relevant.  It also does something I hate DC doing: copying Marvel.

Marvel has done a lot to replace their main heroes over the years and it hasn't worked.  Steve Rogers, Tony Stark, Bruce Banner, and Logan were all replaced in the last few years only to be brought back (thought a number of them are weird cosmic clones but I don't want to get into that now).  The original Ms. Marvel (Carol Danvers) replaced Captain Marvel, but the only reason why this sticks is because the original has been dead for decades and Marvel refuses to admit that this character's selling comic is not popular with fans.

My point is that 5G is not only copying the strategy of Marvel, it was copying a losing strategy.

It appears as of this writing that 5G will not happen and I can understand why.  The comic industry is on the brink because of the pandemic shutdown.  Stores are starting to reopen, but when they do DC has decided not to bet all of their chips on unknown characters who most people do not know.  Remember, 5G was not going to be some isolated mini-series.  All of the main books would go through this hero replacement.  That would be like the time that the Dukes of Hazard were replaced with their unknown, lookalike cousins.  In that case, the ratings tanked and viewership was never the same.  I imagine DC is worried that the same thing could happen with 5G.

What DC needs to remember that in terms of story, the superhero name is not a brand.  To the fans, a superhero is a person.  There is a reason why Clark, Bruce, and Diana have remained the icons that they are for so long.  You can't just put anyone in the suit and call them "Superman," "Batman," or "Wonder Woman."

Perhaps DC, and the entire comic book industry for that matter, should stop focusing on keeping up with trends that are here today and gone tomorrow and instead focus on the characters that we know have endured the test of time.
Posted by Catholic Skywalker at 6:06 PM