Now that we are in the final leg of this weekly list, let us recap what we have so far:


Now, as this list began a number of months ago, it does not reflect the inclusion of:
Logan
Wonder Woman
Guardians of the Galaxy Vol. 2
Spider-Man: Homecoming

And it may not be finished in time for the debut of:
Thor: Ragnarok
Justice League


But now we are getting into the Top 10 of All Time.  The quality of these films must be at a order of magnitude above others. 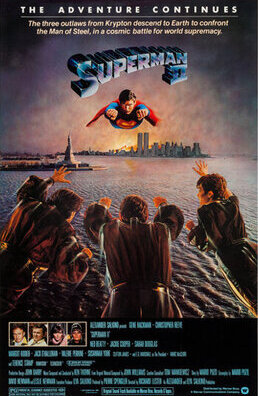 Superman II is one of the archetypal 2nd superhero films.  After the successes of the original film, Superman is faced with two existential dilemmas: one to his physical life and one to his personal life.

The first is the introduction of General Zod and his other Kryptonian henchmen Ursa and Non.  Can we all agree that Terrance Stamp's turn as Zod is one of the greatest Super-villain performances of all time?  He chews the scenery like few can and his sense of superiority is matched only by his deadliness.  He is someone I can believe would expect people to kneel before him.  And notice that Stamp did not feel the need to bulk up with lots of muscle.  Instead, he let his performance project his power and it is completely believable.  The addition of the two other villains make a kind of unholy Freudian trio: Zod is the evil will, Ursa is unrestrained desire, and Non is the absence of intellect.  They represent an impossible challenge for our hero.

The second existential threat is his love for Lois.  Being a hero is a life of sacrifice.  And Clark believes that he has to choose between being a hero.  And it is a struggle that is completely understandable.  How much can we demand of our heroes?  We need them, but we don't have any claim on them.  The only thing driving them on is their will.  So Clark wants a normal life.  Notice how many other super hero films followed this same journey in their second outings: Spider-Man 2, The Dark Knight, The Avengers: Age of Ultron (with Hulk and Black Widow), The Amazing Spider-Man, The Wolverine, and others.  All of this was set up by Superman II.

But this would only work because Christopher Reeve and Margot Kidder.  Their chemistry is electric and you can completely understand why Superman would give up being Superman for her.  And Kidder does an amazing job of showing how overwhelmed Lois is by Clark's love and the enormous sense of guilt inside of her because she feels like she robbed the world of Superman.  Lois' nobility and heartbreak are what ultimately move Superman to undo his romance with her and spare her the suffering she has.  And as much as I do not like the general portrayal of Lex Luther in comparison to his comic book counterpart, Gene Hackman gives a charismatic and comedic performance that matches his talent.

Going back to Reeve, he retains all of his magic from the original film and adds layers.  In the Donner Cut, he lets an angry streak out that is uncomfortable but fascinating to watch.  A moment that always gets me is when he is punched the first time he is without his powers and he asks, "Is this my blood?"  He captures the terror of bleeding for the first time and his utter sense of impotence and humiliation in front of Lois.


This allows for the only really nasty thing he ever does with his powers when he beats up the trucker at the end.  Normally this would be out of bounds for someone like Superman, but the pain you feel at this moment emotionally justifies it.

The action sequences are still fantastic.  I could watch the Metropolis fight scene over and over again.
One of my favorite movie moments occurs when Superman floats there in front of the window and you have 3 great lines delivered in the space of a 16  seconds:


"General, would you care to step outside?"
-Superman showing no fear and calling out the villain away from the civilians.  He floats there as a symbol of light and strength and all-American heroism.
"Superman, thank God!  I mean - get hime!"
-Hackman's comedic timing has never been better or funnier.
"Come to me, son of Jor-El.  KNEEL BEFORE ZOD!"
-I don't know how Stamp said this line and made it work.  It is one of the greatest villain lines ever.

As a Catholic I love the theme of sacrifice for the greater good.  In this context, Superman embodies why our priests are celibate.  It isn't that they shouldn't love individuals.  It's that they must give their love to everyone they serve.  As Zod points out that is Superman's strength and weakness: his care for the people.

Now why isn't this higher on the list.  The simple reason is that its virtues are amazing, but its flaws drag it down.

Both Superman I and II were meant to be filmed simultaneously.  But even though much of the sequel was already filmed, the producers forced Richard Donner to finish up the first film.  And then after the first was released, Donner was fired and another inferior director, Richard Lester was brought on board to film the rest.  A good deal of Donner's footage was jettisoned and Lester refilmed a number of scenes.  Lester brought a sillier, more slapstick sensibility to the movie that undermines its intelligence and emotional resonance.  Most of the scenes with the hillbilly cops, Niagara Falls, and the rest are the result of Lester trying to fill Superman with broad comedy.  And these are horrible failures.

A few years ago, a good deal of the footage that Donner filmed was cut into a restored version.  The best sequence was one that they never got around to filming for the movie, but that had shot as audition footage that was edited in the Donner Cut.  It is the scene where Lois proves that Clark is Superman.  Instead of having him trip into a fire, the scene is Lois-centric and show why she is his mental match in every way.

The Donner Cut, however has a major flaw in that it doesn't have an ending.  The Lester version of the movie has a magic kiss fixing Lois memory.  But when they forced Donner to finish the original Superman first, he used the ending he intended for Superman II for the first one: spinning the world back in time.  He never found nor filmed a replacement ending, so the Donner Cut keeps Superman twisting the world back.

And for me I have a hard time with the scene where Lois and Clark sleep with each other.  I know this may sound strange coming from me and how much I give a pass to movies that portray fornication.  But Superman is such a symbol of innocence and purity and goodness that just doesn't feel right.  Even in Batman v. Superman, the scene I dislike the most because of how it is filmed is the one with Lois in the bathtub.  Perhaps I should hold other films to this same standard, but I do expect more from the Man of Steel.

I would have loved to have seen what would have happened if Donner had complete control of this film.  It may have been better than the original.  But even with its flaws, its strengths are so stellar that Superman II has earned its place as the 10th Greatest Superhero Movie of All Time.
Posted by Catholic Skywalker at 7:36 AM