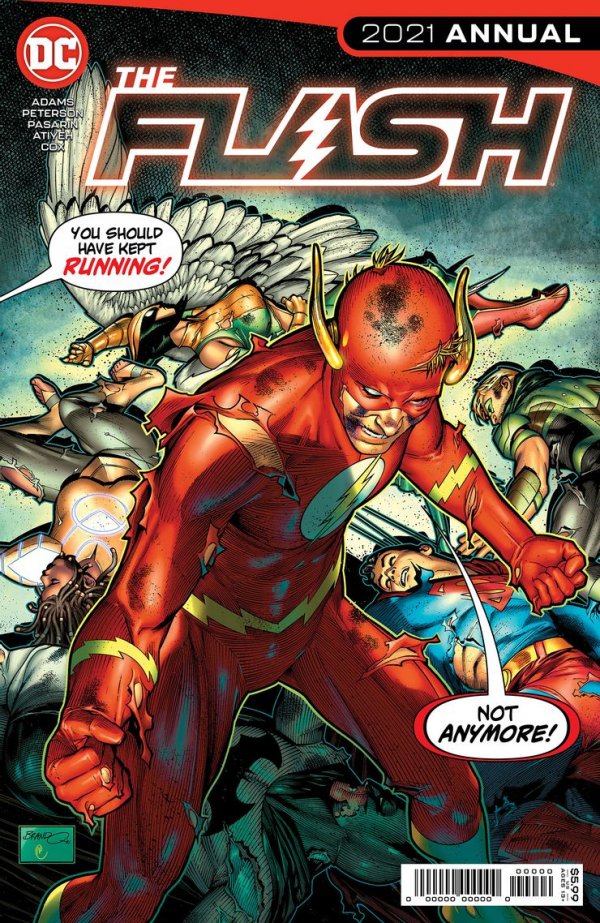 As I wrote in an earlier post, Heroes in Crisis #8 was the worst comic book I have ever read in my life.  Tom King decided to turn Wally West into a villain because he didn't care about the character at all.

To recap, Wally was dealing with post-traumatic stress because during the post Flashpoint reboot, he lost his marriage and his two children.  While recovering at a therapy retreat for heroes, Wally had a panic attack and lighting came out of him killing all the heroes there.  He then travelled to the future to try and cover up his crime.  As I wrote:  "The only way Wally can be fixed is if we find out that he was possessed by some outside force like Hal Jordan was by Parallax. Barring that, Wally West is ruined and his legacy is destroyed."

So for the last few years, DC hasn't quite known what to do about Wally. They tried this a little bit with 2019's Flash Forward, but it didn't really land well.

However, new Flash writer Jeremy Adams has done a good job of bring back one of my favorite heroes.

When Adams took over the book, I did not notice at first.  However, he began to do something that hadn't happened in a while: he made Wally the center of the story.  For the last ten years, Barry Allen has been the main focus of DC as the main Flash, which is fine.  Barry, when written well, is a noble and heroic character to follow.  But the focus on Barry pushed Wally to the side: first by erasing him from the continuity and then turning him into a villain.  Adams decided to bring Wally to the spotlight.

The storyline begins with Wally enjoying his newly returned family and deciding to retire from being a superhero.  He has lost all confidence in himself and he does not think that he should continue to be a hero.  However, there is a "surge" in the speedforce and thrusts Wally throughout the timestream.  This surge has to be contained or the universe could be destroyed.

The smartest thing that Adams does besides writing Wally in character (unlike Tom King), is that he makes this adventure incredibly fun.  Wally is first sent to the ancient Earth where he has to fight with dinosaurs.  All the while, Barry is speaking to him through some kind of temporal com-link.  Adams also wisely uses other characters from DC to help Barry like Mr. Terrific and Green Arrow.  The heroes can see and hear everything Wally does, but he is on his own.

The story that made me jump up and take notice, however, was The Flash # 770.  Wally ends up inhabiting the body of Golden Age Flash Jay Garrick in a fight with Hitler.  The story was fun, fast-paced, well-written, and felt like a throwback to the classic stories of the DCU.  The seamless incorporation of Wally, Barry, and Jay reminded me of the way Geoff Johns was able to keep all the Flashes in balance and makes their relationships so interesting to read.

Speaking of relationships, the next issue has Wally go to the future to speak to his kids.  The best parts of that story were the quieter moments of conversation.  Adams knew it was time to take a little breather and let the reader prepare for the finale but setting the emotional stakes.  It also was a good reminder of what makes Wally such a great hero: he isn't a person born of tragedy.  He is just a decent man trying to do the right thing.  And he loves his life.

The finale of the story in the 2021 Annual has Wally return to the events of Heroes in Crisis.  I will not spoil how it is all resolved, but Adams wrote a moment that was so wonderfully affective and powerful.  During Heroes in Crisis, Wally killed Roy Harper, Green Arrow's original sidekick.  In this new issue, Roy and Wally fight side-by-side against a great evil.  But at one point, Roy asks "Can Oliver see and hear me?"  When Wally says yes, Roy's words were like dagger in the heart.  It reminded me of what an amazing character he is and how carelessly he was tossed aside by Tom King.  Here, we can have proper cathartic end of this arc.

If you haven't read The Flash in a while, go back and pick up all of Jeremy Adams issues.  You will not regret it.

Posted by Catholic Skywalker at 6:58 AM