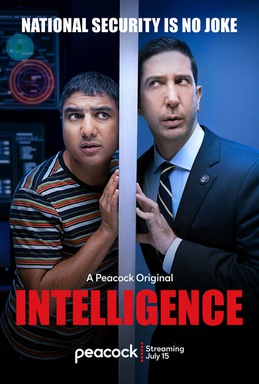 When NBC imported the BBC hit The Office, creator Ricky Gervais gave this bit of advice to American show-runners: Make the main character actually good at their jobs.  He said that in Britain, people are willing to accept that people don't their jobs well.  But Americans would not put up with that nonsense for very long.

That is why Michael Scott, Dwight Schrutte, and Jim Halpert are actually incredibly competent salesmen.  I remember I had a similar fear about Brooklyn 99 when it first started.  The main character Jake Peralta is vain, silly, and immature.  If he was bad at his job, I don't think I could have watched the show.  Being a police officer means that people lives depend on you.  If his time as a cop was nothing but incompetence, all I would be able to think about would be the the great harm he was causing.  Thankfully, they made sure that through it all, Jake was still a good detective.

This brings us to the Peacock TV Original series Intelligence, a show so terrible that I had to stop after the second episode.  Please understand, that I almost always give a new series at least three episodes to get off of the ground.  But this show crashed and burned almost immediately.

The series centers around Jerry Bernstein (David Schwimmer), an NSA agent who is sent to be a liase with British Intelligence.  He is arrogant, condescending, abrasive, and stupid.  And he has NO redeeming qualities.

I've heard someone observe that modern TV characters all start off as horrible people.  There can be an advantage to this in that the series can be about watching the characters grow into better people with very satisfying character arcs.  But we only want to take the journey if we care about the characters.  Michael Scott was driven by a sympathetic desire to be loved.  Jake Peralta, for all his faults, is horribly funny and suprrisingly charming.  Jerry Bernsteain is none of those things.  This isn't Schwimmer's fault.  Though he was my least favorite character on Friends, he was still capable of some real laughs.  The problem is that the material he has to work with is so awful.

Creator and star Nick Mohammed plays Joseph, a member of the intelligence team who begins to act as a kind of sidekick to Jerry.  Like his character on Ted Lasso, he is nice enough, but unlike on Ted Lasso, Joseph is awful at his job.  At one point, the boss, Christine Cranfield (Sylvestra Le Touzel) announces that they will do evaluations and those who don't qualify may lose their jobs.  We are meant to sympathize with Joseph's plight, as he is not very good at his job.  But he works in an intelligence industry, where people's lives are at stake.  The entire episode I kept rooting for him to get fired.

The writing is also devoid of logic.  At one point Jerry performs a lie detector test on Christine and asks her if she has romantic feelings for a co-worker.  It turns out she does.  Jerry assumes that that co-worker is him and tries to blackmail her.  I suppose we are meant to believe that Jerry is such an egotist that he would assume any affection would be directed towards him.  But the assumption lacks any kind of rationality and is there only so the rest of the episode's plot can happen.  (Also in a plot twist that everyone could see coming, Christine is actually in love with the cleaning lady).

Honestly, all the show would need to help it limp along would be a single moment showing that any of the main characters were competent at what they do.  But Gervais was correct: I have no patience for this nonsense.

Perhaps the show gets better.  But when you spend your first two episodes activing repelling me with utterly repulsive characters, I have no interested in wasting any more of my time on finding out if things get better.

This is a shame, because the talent is there in the performers and the concept could work.  But that would happen only if the show had a little more intelligence.

Posted by Catholic Skywalker at 5:38 AM