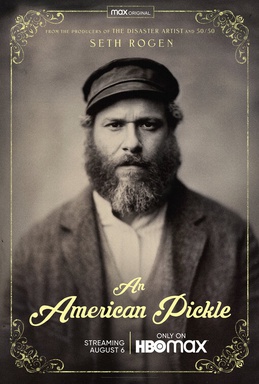 This past year has been so strange that a few things slipped through the cracks.  I have a handful of movies that I each gave a "Film Flash" with no subsequent film review.  I am going to do my best to catch up on those.  However the reviews will be brief.

An American Pickle is a comedy starring Seth Rogen.  He plays Herschel Greenbaum, a Jewish-Russian immigrant in early 1900's New York who ends up in suspended animation for 100 years in a pickle briner.  The movie wisely treats this premise in the silly way it should be and doesn't get bogged down in the mechanics.  Herschel then meets his descendent Ben (also played by Rogen).  At first Herschel is filled with wonder at the modern world, but then he is filled with disgust at how people have become.  Particularly, he is upset at how Ben does not honor his family heritage and religion.  This comes to a head when Ben will not help Herschel in his fight to clean up Herschel's wife's grave.

Herschel then decides to go into the pickle business to show up Ben.  What follows is a an escalating rivalry where both men go to ridiculous lengths to take down the other.

As strange as the premise sounds, the movie actually starts off pretty solid.  The quirky tone works and Rogen actually does a good job of playing both parts as believably different and yet the same.  The problem is that this is one of those movies that is less interested in entertaining and more interested in "saying something."  Part way through the movie, the story inexplicably becomes a satire about Donald Trump, with Herschel standing in place of the polarizing figure.  Herschel is used as a mouthpiece for incredibly offensive statements which for some reason catch on with the masses.  However, things turn on a dime when he says some horribly offensive things about Jesus and the Virgin Mary.  This felt like such an odd diversion where the main story was getting lost.  The other main problem is that the escalation between the two felt unnecessarily nasty and bitter.  Both became increasingly motivated by pride and envy of the other.  This is incredibly ugly to watch and not at all a pleasant thing to experience.  Director Brandon Trost does a decent job and is actually able to insert a few incredibly touching moments without it feeling out of place.

However, these touching moments don't connect the way they should because by the time you reach any poignant moment in the ending, you are disgusted with all that the main characters have done.  By that point, you just want the movie to end.

Posted by Catholic Skywalker at 8:55 AM