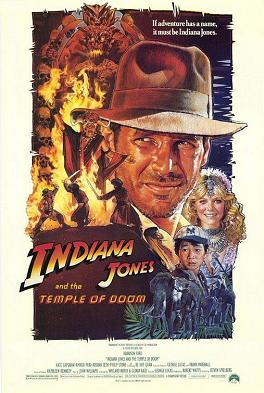 Indiana Jones and the Temple of Doom is what happens when Spielberg has a bad story but is at the top of his game.  It is a movie that reminds us that in this medium, the director is the main visionary who brings the work to life.  Even if the raw materials are sub-par, a great director can make something amazing.

Why is this movie not higher on the list?

The main reason is Willie Scott.  This is not a knock on Kate Capshaw's performance.  But the character of Willie is so cloying that she drains a lot of the fun from the film.  I understand what they were going for, trying to go in the opposite direction of the tough, assertive, and independent Marion Ravenwood.  But this was too much of an overcorrection.  Her screams inspire more eye-rolling than terror.  The film also has a tonal problem.  It is true that every one of the Indiana Jones movies has scenes with creepy-crawly creatures, but this is the film that leaned so heavily into the gross-out horror as to be at times off-putting.  This is the darkest of all the film in the franchise.  Lucas alluded to the fact that his divorce was influencing his outlook when developing the story.  Ironically Spielberg met Capshaw on this film, whom he would later marry.  It mixes the super-dark with the cartoonishly silly.  The escape from the plane is probably just as laughable as the atomic fridge.

But beyond that, this movie still holds up.

The main reason is that Spielberg uses every visual trick to give you an exciting and heroic story.  He firsts sets you off balance with the big musical number at Club Obi-Wan.  But then he pulls you into a James Bond film, with Indy in the full tuxedo.  The introduction of Short Round carries with it the same logic as introducing Robin in Batman: you now have a character through which kids could viciously share the hero's adventure.  Short Round was smart, funny, and a good fighter.  Not only that, but it is Short Round's love that saves Indy from his spell.  That taps into the primal hope of children that they can reach the heart of seemingly tyrannical parents.

The horror element is real and still holds.  I remember the shock I first had when Mola Ram rips out his victim's heart.  I can still remember some time after I had seen the movie, I was at the theater to see something else.  As I was at the concession stand, an older girl came running out of the theater where Temple of Doom was playing.  I was so shocked I asked her what was wrong.  She said she could watch it again.  I looked through the theater door windows (they used to have those) and I saw it was the scene where Willie was about to be sacrificed and this girl did not want to see Willie get her heart ripped out.  This moment always stuck with me because it hit me how utterly effective Spielberg was at creating tension and fear.

Speaking of Mola Ram, Amrish Puri deserves so much credit with making this villain work.  He has so little to go on from the script, but Puri infuses him with a madman's glare while maintaining intense mystical power.  Notice how he laughs maniacally as he murders one of his own soldiers on the bridge for no reason.  To this day, the way he says the line, "And then the Hebrew God will fall" is chilling to me.

And enough cannot be said about Harrison Ford.  He shows off his full range of action, drama, and comedy in this movie.  Nothing he does feels out of character and that is something.  What Spielberg and Ford created in Indiana Jones was a character who was not only incredibly competent, but one that incredibly flawed and reliant on luck.  He screws up as much as he overcomes.  He drinks poison, he loses the diamond, he gets on his enemy's plane, he gets captured and brainwashed, he chooses the wrong path when Short Round tells him the right one, etc. One of my favorite performances of Ford is when he shouts to Willie as he and Short Round are about to be crushed, "Willie... we are going to die!"  It is a mixture of terror, frustration, and funnily enough, utter disappointment.

But what makes him come out on top is not that he does everything perfectly; it's that he never, ever gives up.  In the movie's best shot, and quite possible one of the best shots in all of movie history, Indiana Jones appears in a darkened, tunnel, his backlit presence defined by that iconic silhouette.  But then spotlight slowly reveals the hero there to save the children.  He is beaten down, more-so than we had seen him in Raiders.  But his face is full of such grim determination that he could bend steel and you would believe it.

Throughout the movie, Spielberg frames and lights his hero with such power that the images have remained potent decades later.  All of this comes to a head at the bridge.  Indy is put into checkmate, surrounded by enemies closing in.  He is bleeding, shit torn, armed only with a sword.  He then shouts to Short Round and gets an insane look in his eyes as he raises the sword.  The fight afterwards is just as exciting to watch now as it was when it first came out.  And as before, Indiana has a spiritual epiphany that saves the day.

The finale is also wonderfully happy, like the ending of a fairy tale.  John William's score not only brings adventure, but joy.  Spielberg wisely understands that fairy tales can get incredibly dark, but that we all yearn for the cathartic happily ever after.

Posted by Catholic Skywalker at 6:03 PM