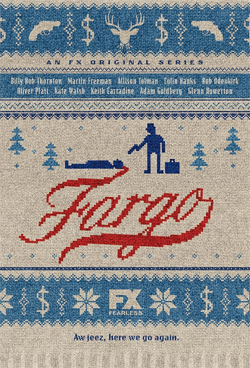 There are many people who would place the movie Fargo on their lists of greatest films of all time.  They would point to the sharp writing, the stunning cinematography, the fantastic performances, and the thematic richness.

I am not one of those people.  When it comes to Fargo the movie, I am lukewarm at best.  I can understand how people can see all of the above positive qualities in the movie, but it mostly goes over my head.  The film, to me, is to meandering and empty of any real heart or depth.  So when they announced a Fargo TV show, I had little to no interest.  It wasn't until a good friend of my, who I will call here the FullMetal Alchemist, spoke to me about the technical achievement of the show.  So I checked it out.

That first season of Fargo is one of the greatest things I have ever seen on television.

All of the hyperbole that people attach to the film should be applied to this show.  You may think it strange that a show with only 2 seasons under its belt should rank so highly.  But trust me when I say that it is well deserved.

Each season of Fargo is its own story only loosely connected to each other.  The first season centers around Lester Nygaard (Martin Freeman), a sad-sack, put-upon insurance salesman who has a chance encounter with a deadly hitman Lorne Malvo (Billy Bob Thorton).  Lester has just been humiliated by an old bully from high school.  Malvo offers to kill the bully for Lester.  What follows is a brilliant character study and morality tale.  Also key to this story is Deputy Molly Solverson (Allison Tolman) and Gus Grimly (Colin Hanks) who work together to set right an injustice.  The second season takes place at the end of the '70's where State Trooper Lou Solverson (Patrick Wilson) tries to solve a murder in the middle of a Mid-West mob war.

This show has some of the best television acting you will see.  Freeman and Thorton gives the best performances of their careers, and that is saying a lot.  Watching Lester's transformation is stunning.  And Thorton completely owns the Malvo character and becomes one of the scariest TV villains I have seen.  Every look and gesture is packed with malice and danger.  Tolman and Hanks, as well as the entire supporting cast, give it everything that it's worth.

The directing is also beautiful.  Even when the acts on screen are atrocious, the directing finds the right way to let it pierce your heart and mind.  So many movies today feel lazy in terms of visual storytelling.  Fargo pushes the limits and creates a true cinematic experience on the small screen.

But the thing that breaks this into the stratosphere are the writing and the themes therein.

The writers have been able to craft 2 seasons of stories that build the tension to an almost unbearable level.  I remember towards the end of the first season I was so emotionally involved that I shouted an expletive at the TV screen, as if that would change the outcome.  I felt real panic and fear in my stomach for the characters.

But beyond that, Fargo is ultimately about morality.  Good and evil are clearly on display in this show.  Nowadays when it is more cutting edge and "artistic" to embrace either nihilism or relativism, Fargo plants its flag firmly on the side of traditional morality.  Not only that, but the show is ultimately a testament to the goodness and value of ordinary people, ordinary love, and ordinary life.  Whereas most shows mock the people in fly-over country, the people of Fargo have many dimensions.  Some embrace evil.  Others turn to goodness.  Things aren't always easy or simple, but the choice between the two is clear and the show does an amazing job of making goodness look and feel attractive.  There is no need to give the heroes of the show a dark backstory in order to create internal conflict.  Our heroes are just decent people trying their best to be good in a violent world.

TV THRESHOLD
"The Crocodile's Dilemma"
(1x01)
The pilot episode brought all of the show's strength at once.  It is incredible who quickly we identify with Lester as he is unjustly bullied and reviled by his wife, his family, his work, and his neighbors.  At once we empathize with him.  And even when he makes horrible decisions, our empathy lingers for a long time, maybe longer than it should.  But the story that unfolds begins slowly but you cannot take your eyes off it.  I never thought I would say that Billy Bob Thorton was charismatic, but I'll be darned if he did not command the screen.  And once that first episode is done, if you are not all in you never will be.

WORST EPISODE
"Buridian's Ass"
(1x06)
Like a lot of TV shows, the beginnings and endings are strong, but the middles sometimes suffer.  Unfortunately Fargo is no exception.  The writers placed in the story an ultimately pointless subplot involving a millionaire named Milos (Oliver Platt) that finally came to its rather unconnected conclusion in this episode.  That storyline was meant as a tether to the movie Fargo, but it did little to further the story and it was the first time the show really felt like it was treading water, waiting for the good stuff.

BEST EPISODE
"Morton's Fork"
(1x10)
The entire first season builds to this final confrontation.  I cannot write too much without spoiling it, except to say that it is an edge-of-your-seat episode from start to finish with such a thematically rich finally that I was filled with an immense sense of satisfaction.

I was worried that Season 2 would lose the greatness, but it was just as good.  I am looking forward to the next season.  While the show sometimes gets a bit too graphic with their depictions of sex and violence, it is not nearly as bad as some other basic cable shows.  It is so refreshing to find a show that is edgy, violent, and thrilling while at the same time being ultimately wholesome in nature.
Posted by Catholic Skywalker at 11:58 AM