With the announcement of the Snyder Cut of Justice League coming to HBO Max, I thought it would be a good time to look back at Snyder's career.
When you look at Zack Snyder's films, you can understand why he has such a passionate fan base.  Even if you do not like his style, you cannot deny that he has a strong visual sense that makes him stand out from most other directors.  When you go into a Snyder film, you are going into something unlike most movies out there.  I happen to truly appreciate his artistry and his boldness in tackling his subject.
Below are all seven of his films ranked.  (I have not seen Legend of the Guardians, so I have left it off the list and am only looking at his live action films).
#7 - Sucker Punch 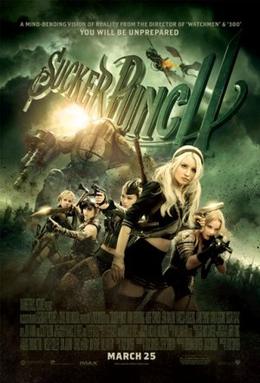 This is a movie that wants to be more than it is.  Snyder wants to say something about how using your imagination, even if it is a form of insanity, can be escape from the prison of life.  As with most of his films, the visuals are strong and the actions scenes intense and creative.  Unfortunately, the characters are nearly as compelling as they could be.  This movie is a case where the visuals try to make up for the lack of substance.
#6 - Justice League

I enjoyed this movie so much, but it was so radically different than its predecessor that it was jarring.  I will always maintain that the scene where Superman turns his eye to see the Flash coming at him is one of the best in any super hero film.  It's hard to judge this as a Snyder film since he recently said that only 25% of what he shot made it into the theatrical film.
#5 - Dawn of the Dead 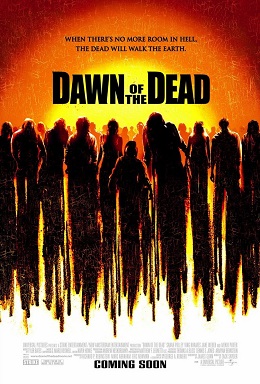 I do not enjoy this movie.  At all.  But when I saw it, I could not help but be impressed by this first-time feature film director.  Dawn of the Dead has a visceral energy that pushes the story forward with incredible intensity while surrounding the characters with crushing despair.  You can see the influence of this movie on other zombie fare like The Walking Dead.  What impressed me too was that Snyder was able to bring depth to characters that could easily be flat and uninteresting.  All of this he did while creating an incredibly scary zombie film.
#4 - Watchmen 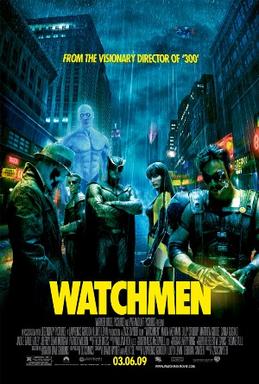 This movie has two major flaws.  The first is that is too slavish to the structure of the comic book.  It makes the movie feel episodic and disrupts the flow.  The second is that Ozymandias is horribly miscast.  I was not as big a fan of this movie when it first came out, but I find that I revisit it more than I thought I would.  In many scenes the visuals are almost hypnotic.  It feels like the comic come to life.  The bold colors pop out brightly making it ironically juxtaposed to the increasingly darker world presented.  And Jackie Earl Haley was inspired as Rorschach, who was able to convey so much of the character through just the voice and body language.  Snyder fully realized the Watchmen world and made it stand out.
#3 - 300 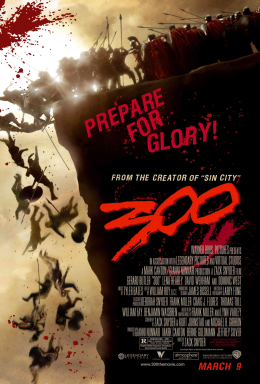 As I've written previously on this blog:
The story is very basic and has been told in so many different ways: a small fighting group must face an overwhelming force.  But what sets that movie apart is the visual spectacle that is 100% Snyder.First there was the decision to film all on green screen rather than on location.  That was a very risky move, considering how it makes the world feel much less real.  But with a simple trick of color correcting the whole movie to highlight sepias and reds, it takes on a ethereal quality that makes you accept the hyper-reality of the world.Second, he knows how to manipulate time.  He did the same thing in Dawn of the Dead, where he would play between slow motion and fast motion, almost like switching tempos in music, to create an arresting image on the screen.He takes this very ugly Spartan world (and make no mistake that there are several morally problematic things with that society), but he does not sugar coat it.  He presents them, warts and all, but still highlights that which makes them noble.Even looking past all of the exaggerated characters, the strong themes of courage and sacrifice shine through in the end.  He touches upon the truth that civilization is something that must be paid for, often with the blood of patriots.  What could have been just another action film became a unique and moving film experience.
#2 - Man of Steel

As I wrote previously on this blog:
Man of Steel is a true spectacle.  This is where Snyder is the strongest.  I spent much of the movie drinking in the visuals.  When Zod and Superman first exchange blows, I got my money's worth from the film.  I remember watching The Matrix Revolutions fight between Neo and Smith thinking that this would be cool if it was between Superman and Zod.  Well, that fight has nothing on the climatic battle in Man of Steel.  If you just want to see spectacular scenes of super people punching each other, this movie rocks.  In the IMAX, you could feel each punch resonate through your chest.
#1 - Batman vs. Superman: Dawn of Justice

As I wrote previously on this blog:
My respect of Zack Snyder as a director increased greatly with this film, and I already held his talent in high regard... Man of Steel was very much an atypical Snyder film, with its hard lighting and non-stationary camera work in physical locations rather than green screen.  In Batman v. Superman, the director melts the Man of Steel aesthetic with sometime closer to what we've seen of him in 300 and Watchmen.  Surprisingly both styles blend very well.  I love the fact that Snyder forces his actors to put on real muscle bulk.  Even in the midst of fighting CGI monsters you always have a concrete sense of the heroes' strength.  The action sequences were high-octane, visually rich moments."
On how he uses the camera I wrote: "But what director Zach Snyder skillfully does is keep the camera at street level as Bruce Wayne (Ben Affleck) races through the chaos to his friends at the Metropolis' branch of Wayne Financial.  This scene is tense and harrowing.  Even though I saw it in the previews, the shot of Bruce running straight into the dust clouds still give me that visceral flashback to all the footage from 9/11.  And by keeping the camera at street level, Snyder visually sets up the contrast of perspectives between our main heroes:  Superman (Henry Cavill) is isolated from humanity because he is so far above and Batman is filled with fear and rage by all the damage felt below."And all the while, Snyder never forgets to tell you the emotional story at the heart of this movie.  He succeeds brilliantly in Batman v. Superman where Gareth Edwards failed miserably in Rogue One: he tells the story visually.  This can be seen best at the end of the battle between our main characters and Superman says that oh-so-important name.  In that moment, Snyder shows the desperation in Clark's face, the confusion and vulnerability in Bruce's and his visual call-backs in that moment to the murder of Bruce's parents immediately put you into Bruce's head and heart space.  In that moment, all his childlike pain and rage come to him and he can see it all reflected in Clark's eyes.  And all of this is captured by how Snyder uses the camera to tell his story.
Thoughts?
Posted by Catholic Skywalker at 11:47 AM