Tonight are the 90th Academy Awards.  Besides the show being too long, to pretentious, too insufferable, and too bland, I do enjoy making predictions.
You can still enter the Catholic Skywalker Oscar Contest here!
I've received a number of messages from people who are reluctant to play this year because they have seen so few of the movies predicted.  I sympathize and this continues to be a real problem for the Academy.  This would have been a much more highly rated Oscars if Logan had been nominated.
But without further ado here are my choices and my predictions: 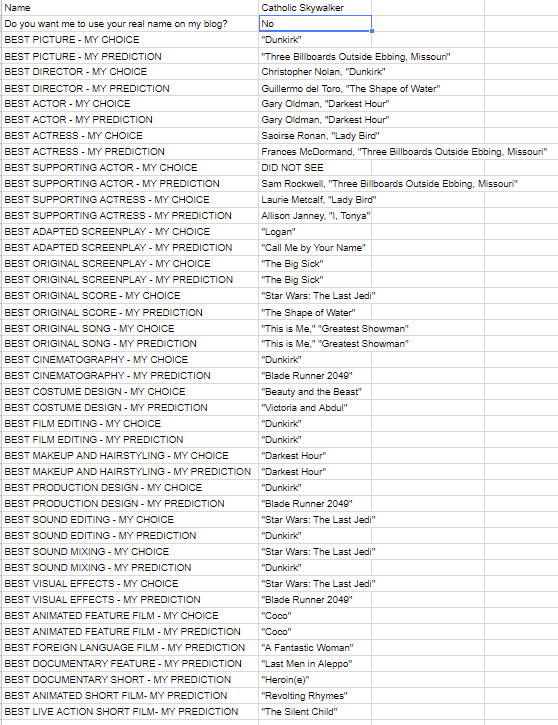 This may be the first time that I can remember where I have not seen any of the nominees in one of the acting categories.  All of the nominees for Best Supporting Actor are in films I haven't seen.  I remember back in 2002, I hurried to see A Beautiful Mind so that I could see what all the hype was about before the show.  But so many nominees just don't interest me.
BEST PICTURE

No is going to care about or remember the winner this year.
BEST ACTOR
While I haved not seen The Darkest Hour, I have heard nothing but good things about Oldman's performance.  And seeing as he is the greatest living actor working today, I would be very happy for him if he would get the Oscar.
BEST ADAPTED SCREENPLAY
This should go to Logan.  If the Academy voters are gutsy enough to do this, then I will keep my complaints about the rest of the show to myself.  But Logan won't win.

I predict that this will be the lowest rated Oscars in recent memory.

And it has nothing to do with the host, the pageantry, the dumb jokes, or the length.  It goes back to my first point: so few people care about the nominated films.  The average viewer has no emotional attachment to any of these movies.  Even Dunkirk, which is a technical masterpiece, does not engender any kind of affection.
POLITICS
If the previous award shows are any indication, the winners are going to use their platform to speak about politics.  This will make for a long and uncomfortable night.  I predict at least 10 President Trump jokes in the opening monologue alone.  This is why I miss Billy Crystal as host: he kept the show light and fun even when it became slow and bogged down.
Thoughts?
And if you want to see again what the REAL best achievements in film were this year, click this link to see.
Posted by Catholic Skywalker at 7:25 AM