The Philosophy of Return of the Jedi: Sacrifice and Redemption 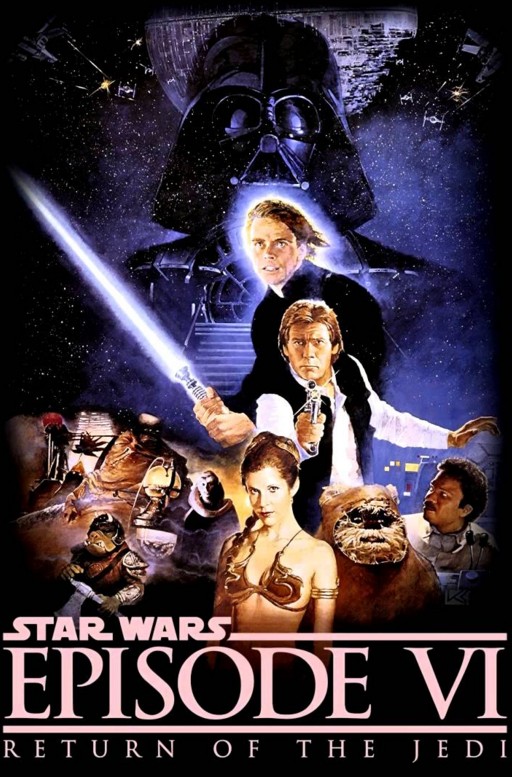 Return of the Jedi is the best of the Star Wars movies.

It is the culmination of all the episodes that preceded it.  It is the resolution to all of the struggles and sufferings of the heroes in the series.

And ultimately, Return of the Jedi is about the power of redemptive love.

Before we continue, I would like to address the issue of sexism.  There is little doubt that the Saga has primarily been aimed at males and that there are very few major female characters.  So does that mean the philosophical anthropology of Star Wars is sexist of misogynistic?

This movie has been accused of objectifying women particularly because of Princess Leia in the slave bikini.  I remember seeing this movie as a child and my only thought on it was: "Oh no, Leia is a slave.  Jabba might eat her!"  The controversy has gotten to a point that in recent weeks it has been said that Disney would no longer license "Slave Leia" merchandise.

Is "Slave Leia" sexist?  My ultimate answer is "no."  I respect anyone who says that she shows too much skin for a movie open to children, but I think those who say that it denigrates Leia miss the point.  The female leads of the Star Wars Saga  are women who are constantly underestimated.  Darth Sidious believes Queen Amidala is too young and naive aggressively attack the droid armies.  She survives in the arena assault.  Anakin does not think she is strong enough to survive the fall from the transport and Obi-Wan does not trust her to save Anakin's soul.  We can see the same thing apply to Leia.  Tarkin thinks he can bully and intimidate her into submission.  Han and Luke go to rescue the "helpless" princess.  Lando thinks he can flatter her to overcome her suspicions.

And Jabba thinks that he can enslave her with no consequences.  But that sequence is really to once again highlight not that women are inferior but that they are underestimated.  The mistake is on the part of the villain, not the hero.  And notice that Leia strangles Jabba with the very tool of his domination: the chain.  Jabba's evil has been returned to him and destroyed him.  The outfit may not be empowering, but Leia's heroism is.

Return of the Jedi also revisits the theme of virtue and the soul from The Empire Strikes Back.  When last we left Han, he was encased in carbonite and frozen in his development.  It is striking that Return of the Jedi begins with the rescue of Han.  Revenge of the Sith also begins with a rescue, but it is one done out of practical strategy with many allies dying along the way.  The rescue of Han has no bearing on the plot to destroy the second Death Star.  It is done as a pure act of love, loyalty, and friendship.  This is something that the Jedi would not be able to grasp in the Prequel Trilogy.

Notice how slow Han is to change.  At first, he literally cannot see how his friends have been transformed.  "I'm out of it for a little while and everyone gets delusions of grandeur!"  He retreats into his cynicism even when Luke tells him that he's taken care of everything.  It is only when he is truly rescued that we see him grow.  Before he was a smuggler who happened to be with the rebels.  But "General Solo" now volunteers to lead the Endor assault.  He is able to proclaim his love to Leia unprompted.  And when he believes Leia's happiness means his heartbreak, he graciously bows out.  I know a number of people who do not like this side of Han, preferring the scoundrel of the first two films.  But this is a necessary move in his character arc.  Han, more than Luke, needs to grow up and be a man.  And being a man means taking on the responsibilities and relationships that you are called to have.

Return of the Jedi is also a rejection of relativism.  As we saw in A New Hope, there is a clear line between good and evil.  The blurring of that line leads to trouble.  Obi-Wan tells Luke that "Many of the truths we cling to depend greatly on our own point of view."  And while Obi-Wan is a friend to Luke, this is a terrible philosophy.  The phrase "point of view" occurs two other times in the Star Wars Saga.  Palpatine tries to convince Anakin of Moral Relativism by saying "Good is a point of view."  And after he has been convinced, Anakin says to Obi-Wan "From my point of view the Jedi of evil."  It is odd that Obi-Wan's statement to Luke reflects much more of a Sith rather than Jedi mindset.

But in terms of philosophical epistemology, truth is not subjective.  In other words, our point of view does not affect the truth or falsehood of something.  All our point of view does is affect how we accept or reject an objective truth.  There is good and there is evil  Calling good "evil" and evil "good" does not change their nature.  It would be like saying "From my point of view, a circle looks like a square, therefore circles are squares."  It is irrational.

And Obi-Wan is clearly wrong, both objectively and symbolically.  He told Luke that his father was dead.  But Anakin is clearly alive.  And to say that he is dead symbolically, i.e. he is irredeemably evil, is also false.  The whole point of Luke's journey is that he is able to learn from Obi-Wan and Yoda, but he is able to break free from their narrow-minded worldview.  He sees more truth than they do because they are locked into their point of view.  They are also mistaken in their anthropology of labeling people as only good or evil.  They refuse to see, as Padme did, that there is still good in Vader and that he is redeemable.  This does not mean that everyone will be redeemed, but everyone can be redeemed.  But the Jedi cannot see beyond their pharisee-like position.  Luke is able to see things from the perspective of others and so acts with mercy.

Yes, Luke does kills all of his enemies on Jabba's sail barges with the except for Jabba and Boba Fett.  But notice that Luke gives Jabba every opportunity, up until being executed, to change his mind.  When they are captured by the Ewoks, he advises Han and Chewbacca to give in, even though they could easily overtake them.  And he constantly reaches into his father's heart to feel the conflict inside his soul.

And this is where once again we see Luke step out and be a different kind of hero than the Saga has seen.  Obi-Wan, Yoda, and the Emperor all want Luke to kill Vader.  Leia wants him to run away.  As a man he has to follow his conscience.  Like Qui-Gon Jinn, who said "I shall do what I must," Luke speaks of saving Vader, "I have to try."

We see a continuation of Luke's decision to embrace death.  This time it is not simply to avoid evil.  He accepts death just on the possibility of saving a soul.  He has no guarantees of redeeming Vader.  But notice how he takes his survival out of the equation.  He tells Leia that she needs to be the last hope for the Alliance.  He tells the Emperor "Soon I'll be dead and you with me."  After protecting himself from Vader's attacks and flirting with giving in to the Dark Side, Luke throws away his only defense.  His lightsaber would be a life-saver if he held on to it.  But he tosses it aside and boldly proclaims his victory, which is not in his survival.

This is how Anakin's soul is redeemed: self-sacrifice.

The Emperor does not understand it.  He is not willing to sacrifice himself.  And he makes Anakin afraid to sacrifice any of what he loves.  It is heavily implied that he sent Anakin the nightmares about Padme in order to push him through fear.  He believed, correctly, that Anakin would be willing to commit evil than accept death.  Notice the monstrous lengths that the Emperor goes through to keep Anakin breathing.  Both Palpatine and Vader deny sacrifice and instead seek "Power!  Unlimited power!"

The Jedi also do not understand it.  Yes, they make great personal sacrifices, renouncing wealth and family.  But they do so to be more detached rather than more connected to others.  They are constantly telling Anakin and Luke to let go of their attachments.  When asked if Luke must sacrifice Han and Leia, Yoda says, "If you honor what they fight for?  Yes."  Neither Anakin nor Luke can abide this.  The sacrificing of others is not the path to moral heroism.

Luke is the one who understands.  The only possible chance he has to save Anakin's soul is to sacrifice his life.  He does not take on the Emperor in a Jedi/Sith duel.  "Like a lamb led to the slaughter or a sheep before the shearers" (Is 53:7)  Luke makes himself completely vulnerable to the Emperor's wrath.

Someone once asked Pope Benedict XVI why Jesus had to die on the cross.  The pontiff made clear it was not because God the Father required a certain quantity of blood and anguish.  Instead, Pope Benedict said that Jesus had to die on a cross because it was the only way we would ever know who God is: God is love.  And love goes all the way, even to the point of death.

And that is what Luke does.  His love for his father goes all the way, even to the point of death.  And when Anakin sees this, he finally understands and comes to his great moment of metanoia (change of heart).  Betraying the Emperor would likely cause Vader's death.  Anakin follows his son's example and sacrifices his life.  And he is able to do this because he finally understands what Luke understood: love is stronger than death.  This is why when Luke says he has to save his father, Anakin says, "You already have, Luke."  He does not need to have his body saved (important though it is) because Luke has redeemed his soul.

Return of the Jedi stands head and shoulders above not only so much other science-ficition and fantasy because at its gigantic beating heart, it is a story not about defeating the villain but redeeming him with sacrificial love.


Posted by Catholic Skywalker at 7:48 AM