GREAT PERFORMANCES:
The Untouchables
Indiana Jones and the Last Crusade
The Hunt for Red October
The Presidio
The Name of the Rose
From Russia with Love
There are many reasons why James Bond has endured as a cinematic icon, but none are as important as the one and only Sean Connery.
I think we often forget how bold and different he was when he jumped out of the silver screen. Watch his performance in Dr. No and you see not only the swagger of self confidence, but we also see the deadly coldness that the franchise forgot until Casino Royale. Connery's best turn is in From Russia with Love, his second outing as bond. It was a movie that is unlike modern Bonds, which are heavy on the gadgets and action. It is a movie of tense espionage and Connery carries you through 007's adventures so that you feel like you are there with him.
His post-Bond career has been as fruitful, if not as iconic. His turn as the mentoring Ramirez in Highlander is some over-the-top fun that leant that small-budgeted movie some gravitas. And his performance as old-tough-as-nails-convict in The Rock established him as the elder statesmen of action stars. But the real showcase of his talents came in the late '80's – early '90's. The Hunt For Red October is given a much heavier tension because of Connery's performance as the defecting Russian captain. The part could have been easily played as straightforward hero. But Connery adds a menace to him as he casually murders a KGB agent and eats his steak as he informs his conspirators that he leaked their plans to Moscow. He projected not only power, but a little bid of madness. There is always a question mark hanging over his head: is he really a defector or is he crazy? Connery adds that edge to his performance. In The Presidio, he was once again playing a tough guy, but the he showcased a more emotionally vulnerable side while trying to relate to his daughter but he also showed the intensity and pain of man who saw his world slipping away. And it is The Name of the Rose that showed some of his greatest emotional intensity. In it, he plays a Sherlock Holmes-like friar who solves mysteries with arrogant impunity. But he is then confronted with his past horrors at the hands of the Inquisition. Connery mixes a potent cocktail of fear, resolve, defiance, and tenderness that shatters the earlier veneer to show a deeper truth. Particularly haunting is a scene where he recounts his tortures to his young pupil. The scene is covered in shadow and Connery has to convey everything with only his posture and voice. He finally won an Academy Award for his turn as Malone in The Untouchables. What makes that strong performance so good is that underneath all of his bravado, you can see below the surface two strong emotions: fear and disgust. He is afraid of what walking the righteous path will cost him and he is disgusted that he has gone alone with it so long. 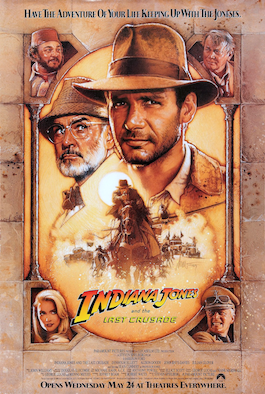 But I have to say that his most impressive performance was in Indiana Jones and the Last Crusade. He traded his usual machismo for frailty in frame, but he had amazing strength of character. I always marvel when watching him and remember that this man is also James Bond. But his Henry Jones is tweed-wearing academic who can still level his son with a paternal tone. This also was the best showcase of Connery's underused comedic talents. Notice how he is able to elicit laughs with his the simplest expression when he stares at Indy across the table or sheepishly smiles after he says, “She talks in her sleep.” And once again, he showed us that his characters have beating hearts under their armor. It always gets me as he embraces Indy and says “I thought I lost you, boy.” And his soft, authoritative voice so believably cuts through the fog of obsession when he says, “Indiana... Let it go.”
Connery is such an icon that he was given, without audition, the roles of Gandalf in Peter Jackson's The Lord of the Rings, Morpheus in The Matrix Trilogy, and Aslan in The Chronicles of Narnia.  He turned all of them down, but it is a testament to him that I can easily see him being amazing in any one of those roles (that is not to disrespect the actors who were cast, but merely a compliment to Connery).
Connery retired from acting after The League of Extraordinary Gentlemen.  He even refused a gigantic payday to do a cameo in Indiana Jones and the Kingdom of the Crystal Skull.
He was 90-years-old.  Very few people will have the impact on cinema and pop culture that he had.  I will pray for him tonight.
Rest in Peace Sir Sean Connery.
Posted by Catholic Skywalker at 7:55 AM