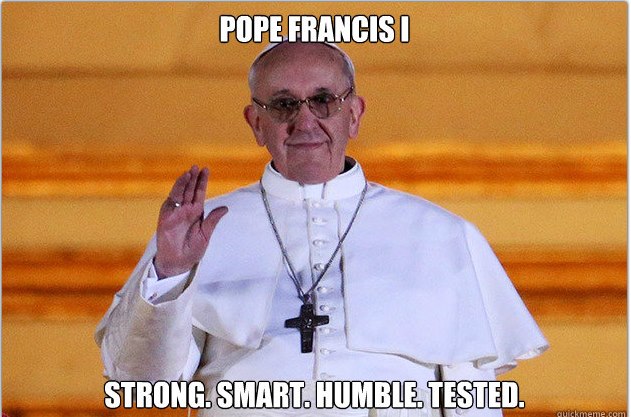 Like most of you, I had never heard of Cardinal Jorge Bergoglio until around 3:15 pm yesterday.  And like you I know very little about this man who is now the 265th person to succeed St. Peter as head of the Universal Church.  I have not had the time to do a lot of research, but here are my initial thoughts:

1.  Humility.  Like Pope Benedict XVI, Francis is apparently someone with very little ambition to become pope.  But he has taken on the burden of the Church as a humble, faithful servant.  I was struck by his initial choice of vestments.  Most popes emerge covered in the red, luxurious robes of papal tradition.  Instead, Francis came to us wearing only the simple white papal cassock.  He chose not to where the golden papal crucifix, but his much simpler cross around his neck.  This is consistent with how he has lived as a cardinal.  In his diocese of Buenos Aries  he was given a Cardinal's mansion.  Instead, he lived by himself in an apartment.  He cooked his own food and rode the bus to work each day.  He lived a life of poverty and solidarity with the poor.  I don't see this changing now that he is pope.  In fact, his papal motto is Miserando atque eligendo (Lowly but chosen).

2.  Prayerfulness.  I love how one of his first acts as pope was to pray for Pope Emeritus Benedict.  Not only did he pray, but he joined with all of the faithful together to prayer for the retired pontiff.  And I was so moved when he asked the people to pray for him before he gave his first papal blessing.  To see that giant crowd grow silent as they retreated inward to their private souls for a quiet moment with the Lord was beautiful.  He understands the necessity of prayer and the power of bringing people together in prayer.

3.  Ignatian.  We now have our first Jesuit pope.  Someone told me (I cannot confirm this yet) that he was disliked by his Jesuit superiors and that they tried to move him to obscurity until Blessed John Paul the Great saw his potential and made him a cardinal.  And since Jesuits take vows of unreserved loyalty to the pope, he is not the head of the entire order.  Being a Jesuit also means that he is incredibly well-educated.  He is a man of science, having obtained a degree in chemistry.  I will be curious to see how the new atheists try to once again claim the church is anti-science now that we have our new Scientist Pope.

4.  Orthodox.  As I wrote about in my last essay, there are those like Chris Matthews who will be perpetually disappointed that the pope will continue to be a faithful Catholic.  While he expresses great distress at the unequal distribution of wealth, he has distanced himself from Liberation Theology, which is heavily soaked in Marxist philosophy   He has come into sharp conflict with the president of Argentina over "gay marriage" and abortion.  He even made it clear that politicians who support intrinsically evil acts like abortion should refrain from receiving Communion.  Any hopes that the new pope would declare good that which is evil have now been dashed.

5.  Evangelization.  In his opening words he talked of evangelization.  Many people believe that he has chosen his papal name from Francis of Assisi   His connection to humility and poverty would support this claim.  But we should not forget that he is not Franciscan, but a Jesuit.  He may have thinking of St. Francis Xavier, who spent his life spreading the Gospel to the ends of the Earth.  I believe that Pope Francis understands the need to reach out to the poor of the world.  But more than the need for food the body is food for the soul.  The world needs the saving message of Jesus Christ now more than ever and we need to refocus our energy to the New Evangelization

6.  Humor.  I love that his first words were a joke.  "You all know that the duty of the Conclave was to give a bishop to Rome. It seems that my brother Cardinals have come almost to the ends of the Earth to get him ... but here we are. I thank you for the welcome that has come from the diocesan community of Rome."  I think it not only points to his great humility, but to a lively and jovial spirit that I think he will bring to the papacy.  Being a joyful Christian is one of the best witnesses to the faith.

7.  Hope.  As I said, I do not know Pope Francis the way I new Pope Benedict XVI the day he was elected.  Everything I have read has encouraged me.  But this is not a hagiography   This is hope.  The fact that he chose a novel name, a name never chosen in the 2000 year history of the papacy, says to me that he intends to begin something new.

And I can't wait to find out what that is.

Posted by Catholic Skywalker at 10:15 AM

Email ThisBlogThis!Share to TwitterShare to FacebookShare to Pinterest
Labels: Essays