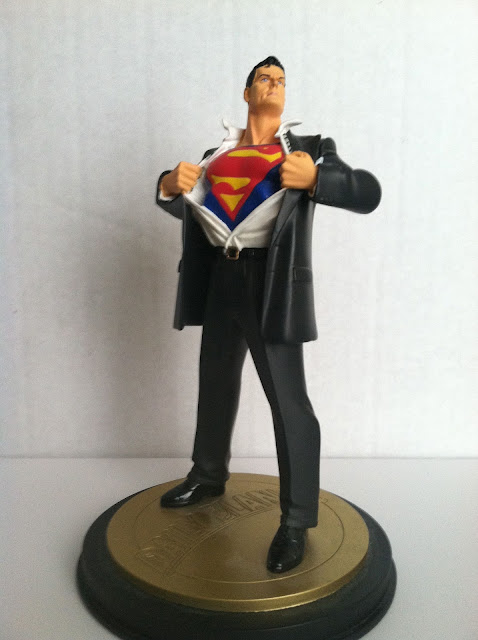 Below are a list of movies that are NOT on this awards page because I had not gotten a chance to see them.


Beautiful Boy
I Can Only Imagine


So of the movies  I've seen this year, here are the winners: 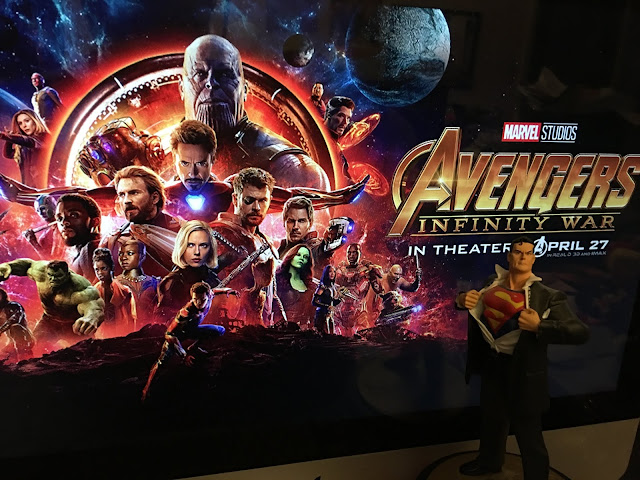 (from my review of the movie)
Watching this movie on the big screen, I marveled at its sheer audacity of scope.
For a comic book geek like me, stories of universal power and peril are common.  For the cost of a few dozen printed pages of art and words, you can be transported to the furthest reaches of the cosmos and populate your story with dozens and dozens of the biggest heroes in your shared universe.  But the idea of translating that to the big screen seemed impossible, not only in terms of budget, but of balance between characters, plot, theme, pacing, and spectacle.
But Avengers: Infinity War pulls off the impossible.
...
Writers Christopher Markus and Stephen McFeely have created a script reminds me of two other classic movies: The Lord of the Rings: The Return of the King and The Empire Strikes Back...  Like The Return of the King, Infinity War juggles multiple story tracks for our heroes in vastly different times and situations.  In that film you had to juggle the ring to Mount Doom, the Paths of the Dead, the Steward and his son, the defense of Minas Tirith, Eowyn and Merry secretly joining the fight, Arwen's fall, and others.  It is a very fractured plot that has to be balanced properly.  Infinity War has several disparate story groups that occasionally converge and then re-diverge.  And the groupings are often ones that you would not expect.  But you get so caught up in a particular story arch that it is almost a surprise when you return to another story thread.
...
The movie is thematically about the war between two opposing ideals: Life and Death.  One of the things I saw in Thanos was the embodiment of what Pope John Paul II called the Culture of Death.  He is willing to kill any number of innocents in the name of practical prosperity.  And our heroes, by contrast are willing to lay down their own lives and defend the lives of all the innocent.  The hero's motto in the movie is "We don't trade lives."  I thought this was a beautiful summary of the value of all life.  And this view is challenged in our heroes and they may not pass the test. 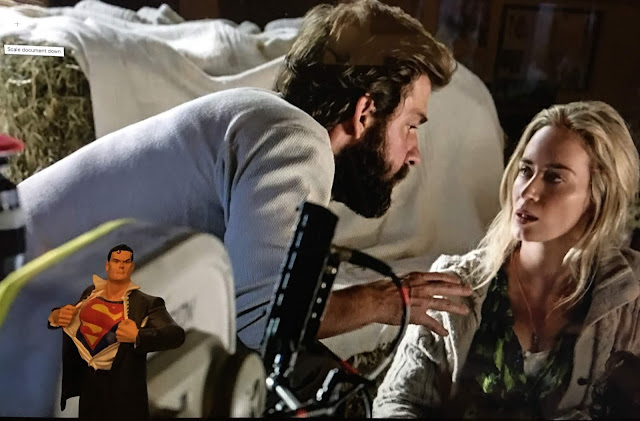 (from my review of A Quiet Place)

George Lucas once said that you should be able to watch a good movie with a sound off and still be able to follow the story.  That is because movies are a primarily visual medium.  Director and star John Krasinski has followed this principle to make A Quiet Place the best directed movie I have seen this year.

The dynamic between mothers and fathers was so well done in this movie that it is difficult to put into words.  In fact, putting it into words is always going to be a problem, because the truths about who we are are so deep.  But Krasinski follows the story-telling maxim "Show, don't tell."  We don't need characters philosophizing about the role of family dynamics.  Instead the characters act them out.
...

It is hard for me to believe that this is Krasinski's first feature.  He handles the camera with skill and experience.  He juxtaposes the idyllic landscapes with the monstrous situations perfectly.  He uses some wonderful subtlety, but he is not afraid to telegraph his punches, as he does in the scene with the nail in the floor.  Some first-time directors try to go overboard in genre-breaking artsiness.  Krasinski may be reaching for greater heights, but he never forgets that his main job to tell a good, scary story.  And while I have focused on the visuals, the sound design is outstanding.  Because sound is used sparingly, every sound matters and carries with it immense weight. 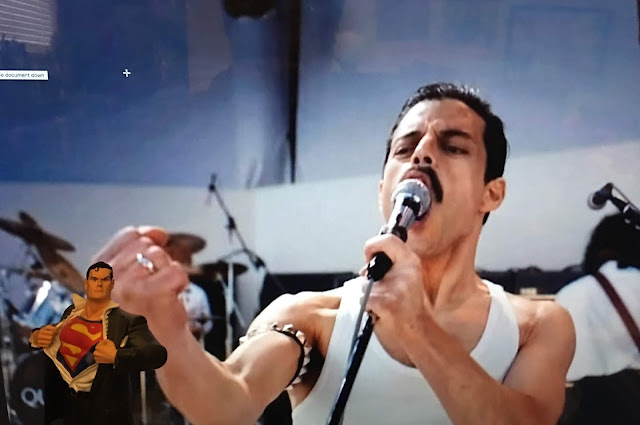 (from my review of Bohemian Rhapsody)

Malek is amazing at showing us Mercury's journey.  He was smart enough not to do a full on impression of Mercury.  Instead, he creates a general affectation and then lives out the character's inner most struggles on the screen.  Like Mercury himself, Malek shows us the absolute thrill and confidence of a rock star while also showing us the wounded, broken heart underneath.  In the movie's best scene, Freddie has just finished throwing a lavish party.  One member of the waitstaff, (Aaron McCusker) is cleaning up while Mercury is at his piano.  Mercury playfully gropes the man, which is an act of an entitled and powerful celebrity.  The server turns to him and in no uncertain terms lets Mercury know that if he ever lays a hand on him again, Mercury will regret it.  What follows is Mercury completely shedding the rock star persona and shrinking into an apologetic little boy asking for forgiveness.  What Malek does here is show us that Mercury's over-the-top persona is his armor to shield the painfully lonely and shy boy who feels unloved and unaccepted.  The scene is such a wonderful marriage of script and acting that this scene alone should earn Oscar nominations for acting and screenplay. 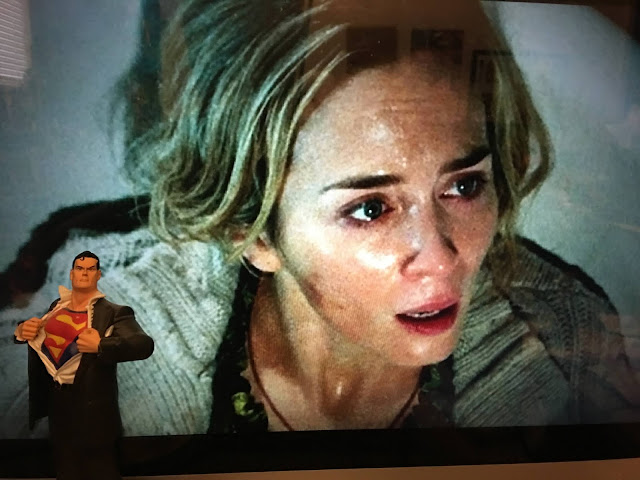 I am always impressed when actors give great performances when essential items in their toolbelt are removed.  That is why I have given awards to Jackie Earl Haley's Rorschach and Tom Hardy's Bane because they had to build a character without facial expressions.  Blunt has the opposite challenge here.  For the most part, she has to express everything she is non-verbally.

Without words, she expresses more than most actresses can with pages of dialogue.  A simple look can convey fear, resolve, and anguish.  Nothing tops the labor scene.  It the intensity is not from the monsters but from Blunt.  She makes you believe the unbelievable struggle to hold back her cries of agony while bringing forth a child whose cries could be the death of both of them.  It's not a mistake that this image of her in the tub is the main iconography of the posters.  She taps into something deep and primal and it is amazing to see. 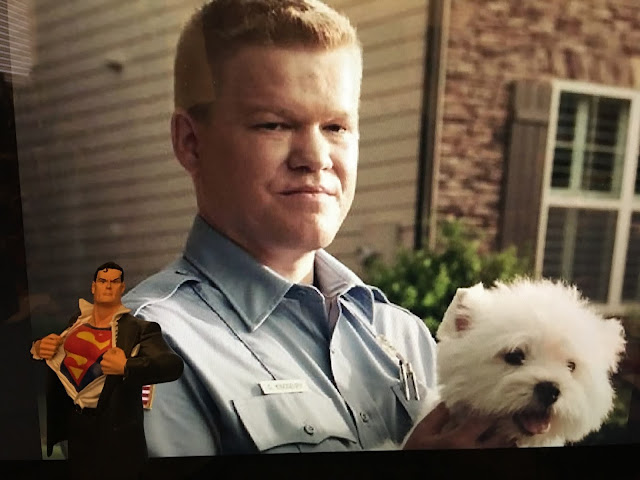 Comedic performances are sadly overlooked during awards season.  But I can tell you from experience that comedy can be much, much harder than drama.  I think most people are going to ignore this outstanding performance by Jesse Plemons in Game Night, because of the film's genre.  And that would be a huge mistake.  You can see on the screen all of the skill that it took Plemons to pull off this strange character.

(from my review of Game Night)

But special accolades must be given to Plemons as Gary.  This character is that socially awkward neighbor with whom any interaction is awkward and painful.  Everything he says and does is off-putting in the cringiest way.  And Plemons gives total commitment to embodying all of that awkwardness.  Even in the still photos in Gary's house, you can see Plemons give off that dead-eyed, slightly psychopathic stare that makes you both scared of him and sad for him.  Every time Plemons was on screen he made me laugh loudly. 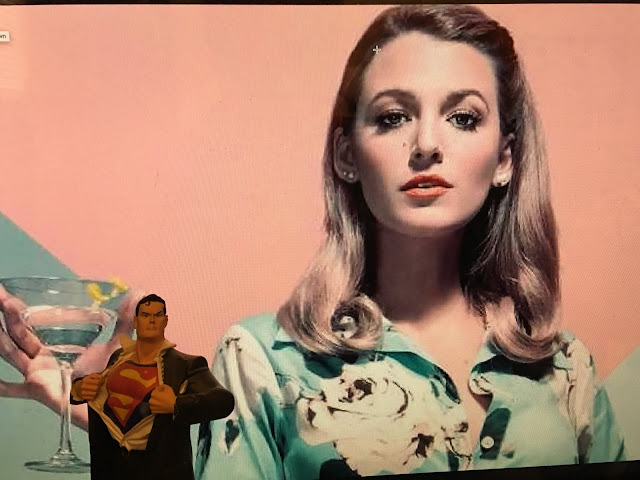 A Simple Favor is a terrible movie.  It fails on almost every level.  The one and only thing that has any value in this film is Blake Livley's performance.  Her character is morally depraved, shallow, conniving, and downright evil.  But she does a stellar turn by imbuing her Emily with coolness and charisma.  She struts confidently into a scene and completely owns the room.  You can easily see why so many people could become obsessed with her and it is not because of her looks.  Lively looks intently at the other characters with disdain mixed with a slight curiosity.  It is a look that makes you feel inferior but also fills you with a desire to impress her.  Because the script lets her down so much, Lively must build this character mostly from her own acting skills. 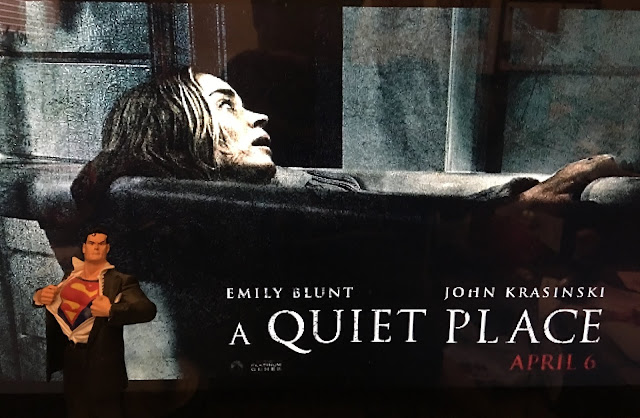 That is the maxim of movie writing.

And this film does that beautifully.

You never get a full picture of what is happening to the wider world.  And the external logic of combating and alien invasion from auditory hunters is a bit far fetched.  But the writers wisely take you away from all of that to a small isolated farm.  The wider world doesn't matter.  In fact, the monsters themselves don't matter.  All that matters is that the family is in danger from without and their relationships are being tested from within.  The screenplay has to convey most of this by how the characters silently act rather than what they say.

This interior story and how it expressed in so few words gives the movie its power.  When words are few, they are precious.  I still get chills at that moment when one character tells the other that they love them.  It is a line that is in hundreds of movies, but because you are so starved for words, they are like water in the desert. 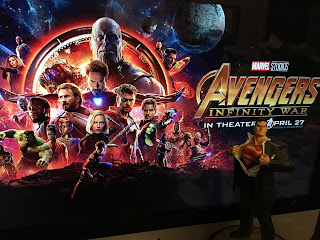 While a good portion of the work was CGI, the use of makeup on the Guardians and the like was still top-notch 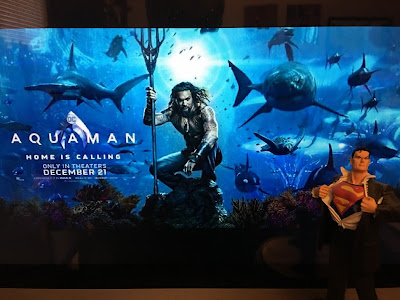 While Avengers: Infinity War has a larger scope, the special effects for Aquaman edge it out for its fantastic world building and their ability to make the audience simply accept that the characters are having conversations underwater like it isn't anything strange.

The score for this movie is as epic as its action while carrying on nice rock-n-roll riffs to match the outsider vibe of the main lead.

"Shallows" - A Star is Born 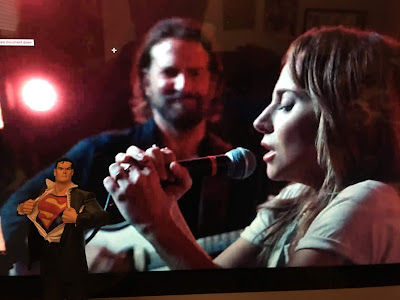 While the movie ultimately fails, the power of its music cannot be denied.  "Shallows" is a song that draws you in with its long, melodious notes and vivid imagery.

The imagination that went into the Atlantean design reminded me of the work WETA workshop did for The Lord of the Rings.  Everything feels futuristic with a foot in ancient tradition.

Below are the list of all the films of 2018 that I have seen, ranked in order of excellence:

Posted by Catholic Skywalker at 8:24 AM