Sunday Best: TV Dramas of All Time #5 - Freaks and Geeks 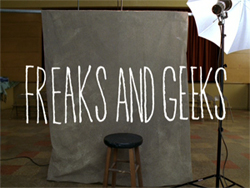 This show was lightning in a bottle.

Not quite comedy, not quite drama, but funnier and more tragic than most shows I have ever seen. The show took place in a 1980's high school.  The main character was Lindsay (Linda Cardellini), a former honors student who has an existential crisis and begins hanging out with the more troubled kids or "Freaks."  This includes bad boy Dan (James Franco), amiable stoner Nick (Jason Segel), misanthrope Ken (Seth Rogen) and Dan's crazy girlfriend Kim (Busy Philipps).  Also staring in the show is Lindsay's brother Sam (John Francis Daley) and his fellow freshmen friends Bill (Martin Starr) and Neal (Samm Levine) who are the "Geeks" of the show.

When you set a show in a high school, and you make that show a nostalgia show set in the early 80's, you should expect something like Dawson's Creek meets That 70's Show.

But Freaks and Geeks never took the easy way out of difficult situations and it never played cheep laughs. The pain of the show felt so real that it was as if it had happened to you or your friends while you were growing up.

But the most amazing thing of all was that there were no one-dimensional characters. Everyone, and I mean everyone, was given an amazing amount of depth.  From the gym teacher, the geeky religious kid, the school bully, etc, you never felt as though you were watching caricatures or archetypes.  There was always a deeper life beneath what was seen.  They were some of the most real, and complicated characters ever on TV.  It wasn't that their problems were the most earth-shattering.  It was that there was something so obviously reflected in real life.  I think of Sam's hopeless crush on the unattainable cheerleader Cindy Sanders (Natasha Melnick).  For most of the series, it follows the standard TV trope of Sam trying to get closer to the oblivious girl only to be constantly pushed to the friend zone.  But the way in which they resolve the relationship is refreshing, surprising, and disappointing, but in a completely satisfying and realistic way.

And while the main character has become an athiest, the show does not take this as an opportunity to mock religion.  Lindsay's religious friend Millie (Sarah Hagan), does come off as a bit preachy, but she is never anything but thoughtful and kind.  Lindsay's loss of faith is more liability than liberation.  And giving depth to those engaging in bad behavior does not make the bad behavior more appealing.  In fact, the more you come to love these characters, the more pitiable becomes their vices.

This also has the best acting of comedian Joe Flaherty, who is best known for his very broad work in movies like Stripes, One Crazy Summer, and Happy Gilmore.  I still have fond memories of the scene where he affectionately, but unapologetically explains to his daughter why he is overprotective.

"You know what the difference is between you and Nick? You're my daughter. Every second you're out of this house... every second that I can't see you... or know what you're doing... it's... it's absolute torture for me."

"I'm with the Band"
(1x06)
There are two stories here that really ground the show and separate it from others.  The first is Lindsay trying to get Nick and his friends to get serious about their band.  But Nick particularly has to come to the realization that his enthusiasm is greater than his skill.  This is heartbreaking to see, but so obvious that we pity Nick for his pot-induced obliviousness.  He is clearly being held back by his lack of discipline but we feel nothing but sympathy for him.  This was when I understood how they were dealing with the issue of casual drug use.  I am someone who hates the simple acceptance of recreational drugs in pop culture.  And this drug use is something present from the beginning of the show.  But rather than preach like an After School Special, Freaks and Geeks simply shows the stolen opportunities to success and happiness that comes from such behavior.

The second story feels like a typical high school TV trope: Sam does not want to shower after gym class because he is afraid to be naked in front of others.  This comes to a head when the gym teacher (played by Biff Tannen himself Tom Wilson) confronts Sam about it.  What should have been a traditional silly comic moment is instead a subtle and affecting scene.  This was when I realized that even the most tangential characters had depth.

This is the episode that is the most like all other shows in this genre.  Kids go trick-or-treating when they are too old, parent/child traditions are abandoned, and pranks go too far.  It is almost as if the shows creators felt like they had to keep to formula for a while before branching out too much.

BEST EPISODE
"Discos and Dragons"
(1x18)
This was the final episode of the series and it left a lot of dangling plot and character threads.  But at the same time it allowed a growth in the characters that I found shocking and surprising.  Perhaps "growth" is the wrong word, since some characters end on a low note, rather than a high note.  Regardless, there is a definitive change in all of the characters.  At the end, even though it is incomplete, you feel like you have gone on a journey with them and that you see where the road as lead them so far.  (Also seeing MST3K's Joel Hodgson play the host of disco dancing tournament is a real treat).

The show ended with too many unresolved threads. I hope one day in the future they do a TV movie or something to that effect. It would be like catching up with old friends to see how they are doing and if they're happy.
Posted by Catholic Skywalker at 6:52 AM