With Spider-Man: No Way Home coming out this week, I thought it would be good to look back at the previous outings of this iconic character and see where they rank.  Looking back at a few of them, I was actually fairly surprised at how my thoughts and opinions have evolved over time.

So of the eight Spider-Man movies that have already been theatrically released (ironic), here are my rankings: What is so frustrating about this movie is that there are moments of actual greatness here.  We finally get to see that wonderfully horrible moment from the comic that defines Peter's tragedy as an adult Spider-Man.  The problem is that the main antagonists are absolutely awful and it is surrounded by an overblown conspiracy that doesn't really go anywhere. 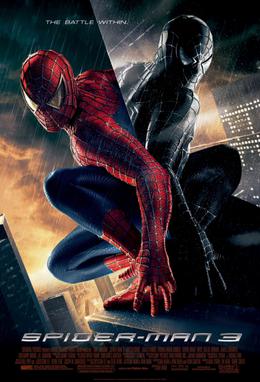 A lot of people blame the villains here, and there is much to be said about how poorly they were handled.  But the main problem is with Peter himself.  It's okay to see him tempted by the dark side.  That isn't the problem.  People are okay with heroes fall a bit from the light.  They do have a problem with their hero acting like an... a word I can't say on this blog (but begins with "a" and ends with "e".). This isn't even the problem that occurs with the Venom suit.  Peter already becomes a self-centered $*^$#&@ before any of that.  It makes for a very unpleasant watch I liked this movie a lot more when it first came out, but the sequel spoiled a lot of it.  It removed a lot of the cheesy elements from the Raimi trilogy, but it lost a lot of heart in translation.

What I like about these MCU movies is that they really explore Peter's life and struggles as a metaphor for the high school experience and growing up the way a show like Buffy the Vampire Slayer did.  This movie isn't great, but it is fun and very re-watchable.

See my note above.  I love how Tom Holland brings a youthful energy to the character that we never quite got with the other two.  I love watching his relationship with Tony.  And Keaton is great in his role as one of the most sympathetic villains in the MCU, I almost rooted for him. As I've written previously: What the movie captures so well so early on is how much of burden it is for Peter to be Spider-Man.  Unlike Batman or Iron Man, Spider-Man does not have unlimited resources.  Heck, even Clark Kent does better than him in the same field of journalism.  But Peter's life is on the rocks.  Director Sam Raimi captures in such nice visual touches Peter's poverty.  It is such a nice carryover from the first film to see how Peter refuses to make money off of his power.  That path led to the death of his Uncle Ben.

And these early scenes set up the main struggle of the film: is being Spider-Man worth it?  Being the hero leads to an overall decrease in his quality of life.  He barely makes rent, he cannot help his Aunt May, he cannot be with the woman he loves... and he still tends to be hated.  This is a crucial step in the hero's journey, reminiscent of the events of Superman II.
2. Spider-Man

I recently rewatched this one and I was surprised at how much I enjoyed it.  A few years ago, this movie did not even make my top 25 Best Super Hero Movies of All Time.  The reason why is that there is a cheesiness in the films that I found to be a real turn-off, particularly most scenes with the Green Goblin.  I think they handled him poorly.
But upon rewatch, the tone came off less like cheesiness but innocence.  There is something incredibly wide-eyed and wondrous about watching Peter discover his powers.  I love how Raimi handles the scene where Peter lets the robber go.  If you don't know the story, you completely feel his nasty vindication and so can follow along with his horrible guilt.  The performances are mostly excellent.  Even Norman Osborne, when he isn't the Goblin, is actually fairly nuanced.  But the best is JK Simmons as Jameson.  He hit the nail on the head exactly with broad comedic character without going completely into caricature.  And I love the fact that they got his character right when he refused to give up Peter's identity in order to save his own life.
If you haven't seen this one since it came out nearly 20 years ago, you should give it another look.  It has aged very well.
1. Spider-Man: Into the Spiderverse

Everything about this move works.  As I wrote:
This is the best Spider-Man movie that has been made.I don't say that lightly or in the mode of a fanboy who is pre-set to love anything comic book related.  I have several times noted my dislike of Miles Morales (the main Spider-Man character in this movie) from the comic books.  He was made up out of thin air by Brian Michael Bendis and inserted into the Spider-Man mythos with no connection other than his powers were similar.  He had no connection to Peter Parker or any of the larger Spider-Man family.  He was also incredibly boring as a character, not given any real flaws or even universal appeal.  He was as bland and as uninteresting as you could make a character.Thank goodness for Into the Spider-Verse.  It is the best thing to happen to Miles Morales....If the description above seems outrageous, it is.  And yet it all works!  Like my experience with Guardians of the Galaxy, everything in the previews told me that I was going to hate this movie and I was so delighted to be wrong.Credit must first be given to writers Phil Lord and Rodney Rothman.  First of all, they completely embrace the concept of multiple universes into the story and weave it in without dumbing it down for the audience.  They throw you into the deep and and challenge you to keep up.  Second, they have crafted a very powerful hero's journey.  All of the other Spider-men are seasoned veterans.  Miles is all new to the hero business.  He is scared and unsure, prone to mistakes and lapses in judgment.  But throughout the whole process, he has to grow and step into the role.  Nothing about this journey seems pat or easy and when Miles finally does step up it is immensely satisfying.  Finally, Lord and Rothman have crafted on of the funniest scripts all year.  I laughed out loud so many times, not only because of the punchlines thrown, but because they had gotten me to care about the tangled relationships of the characters.  Character driven jokes mean more because it draws you deeper into the lives of ones on screen.  The best gag in the entire film is when Miles, who has no technical expertise is told to hack into a computer in the enemy's lair.  Miles' ultimate solution to the problem had me laughing long after the joke had passed.Directors Bob Persichetti, Peter Ramsey, and Rodney Rothman all should get special accolades for their bold visual style.  I don't know of a single other movie that looks like Spider-Man: Into the Spider-Verse.  If you go too idiosyncratic with your style, you could alienate a lot of casual viewers.  But their risk paid off in this truly gorgeous film.  I don't think I've ever seen a movie that feels more like an actual comic book come to life.  The spotted-color effect makes gives the impression of old newsprint.  The digital stylings make for some truly dynamic visuals.  And I love how they seamlessly blend different animation styles.  Spider-Ham will pull out a cartoon mallet that looks like it just teleported from a Bugs Bunny cartoon while Peni Parker moves and feels like something out of modern anime.  And while the visuals are flashy, they are all there to serve the story.  All of this is about making Miles into a hero.And, like a comic book, it isn't afraid to make deep cut references to a host of stories past that may go over the head of casual viewers but do not distract from the story.  It also throws in crazy complications.  What happens when a Peter Parker from another universe sees the MJ from this one?  Even if he knows they aren't the same, how would you react if you saw an alternate version of your family?  Those kind of conundrums are sprinkled throughout the film.A good Spider-Man movie always has at its heart the central theme of "with great power comes great responsibility."  And this movie is no exception.  Unlike the comic book version, this Miles Morales is someone you can easily relate to in his ordinariness.  His reactions to the extraordinary circumstance of the movie feel like actual human reactions, not reactions of noble characters as need by the script.  The power of this is that it opens up the idea that ordinary people like us could rise to the occasion if we are called.
Posted by Catholic Skywalker at 8:52 AM